It seems like ages since I’ve been able to head for the hills for all sorts of reasons and I was getting really excited about the meetup with Penguin, my oldest pal for a trip into the Mamores. I’d also fancied trying out the micro tarp from Bob & Rose and with the weather set fair(ish) at the weekend I sat idly sipping a coffee at the Ice Factor in Kinlochleven waiting for Penguin to arrive. With the Friday forecast being a washout we’d agreed to meet up midday on the Saturday and decide what to do once we were up at the lochans at 750m. The posters on the bar room wall brought back ancient memories and was that a relief map of Chamonix? I chuckled to myself knowing where it came from if it was the one I thought it was. The place was quiet although a small group were in the freezer where the ice wall is and I had a nice reminisce of days and nights climbing the real stuff. I felt like Norman Collie on his window seat at the Sligachan with folk remarking on the ancient mountaineer in the corner, alone with his thoughts and his memories. That was until I remembered the soup hadn’t arrived and the moment was lost in a mental fug of ‘where’s ma soup’ panic.

The summer tourist traffic delayed Penguin and we headed off around half one up the network of paths toward Coire an Lochain. It’s always a nice feeling passing everyone else heading down. You get the impression the hills are emptying and you’ll be the only ones up there come nightfall. At the lochans we had a quick confab and pushed on to Binnein Beag, dumped the sacs and bimbled up the ridge in a cold wind that rose to a ferocious gale on the summit. The views were wonderfully refreshing although the Grey Corries and the Ben and Co. were under a thick blanket of cloud. Schiehallion was instantly recognisable though.

It was around 7pm and the light was turning soft and calming despite the wind and the view back over Coire an Lochain to the Buachaille was just out of this world, with a black stormy sky glowering over the calm ochres and duns below. The storm had business elsewhere and only managed a brief shadow or two on its way over the Glencoe hills.

Back at the sacs we had a bite to eat and another confab. I’d spotted a sheltered patch just down from the lochan but as it was still light we headed back along the path to Coire an Lochain, aiming for Sgurr Eilde Mor the next day. I’d been expecting windy conditions but the 70m descent on the path takes you into a lovely little spot which I suspected would give us a sheltered bivi for the night but it was mostly bog. As we dropped back into it I heard a bark and a small group of deer ran up the hillside towards the main ridge. The girls looked splendid in their summer coats and I’m sure they had a glint in their eye at the thought of the approaching rut.

So we loaded up with fresh water from the burn and plodded back up to the 740m area next to the lochans and settled down on a small rise above the calm waters. Calm until I’d pitched the tarp and rolled out the bag. A couple of minutes, quite literally, after settling down to brew up the wind switched to the south and started blowing a gale. The tarp was pointing straight into it and with Penguin feeling the cold we decanted down the slope to get a bit of shelter. All day the wind had been from the south west and the area between Coire an Lochain and Binnein Beag was sheltered by the main ridge but by evening it was blowing at a brisk pace right across the lochans but we got reasonable shelter just a bit lower but still at 740m.

Brew made, dinner guzzled, ensconced in the bivi bag watching the Milky Way, shooting stars and a billion sparkling lights in a clear sky I felt the most contented person on the planet. I looked straight up to the pole star with The Plough and Cassiopeia on either side. New stars appeared from behind Sgurr Eilde Mor while others dipped behind Binnein Mor. I’m sure I could hear the low rumble of the earth’s rotation. A deer barked in the darkness. All was well with the world.

Later in the night I was woken by the soft patter of rain on the bivi bag and tarp and the stars had gone, replaced by dark scudding clouds and I could just make out the black shapes of mountains.

In the morning I opened my eyes to a wonderful view to Binnein Beag. What a wonderful sight to wake to, lying in the bag, a huge grin on my face.

The sun came out and warmed up Sgurr Eilde Beag next to us.

We breakfasted and headed up Sgurr Eilde Mor into a completely different world where the wind was fierce and cold and summer was far from our minds. It was bitterly cold up there. 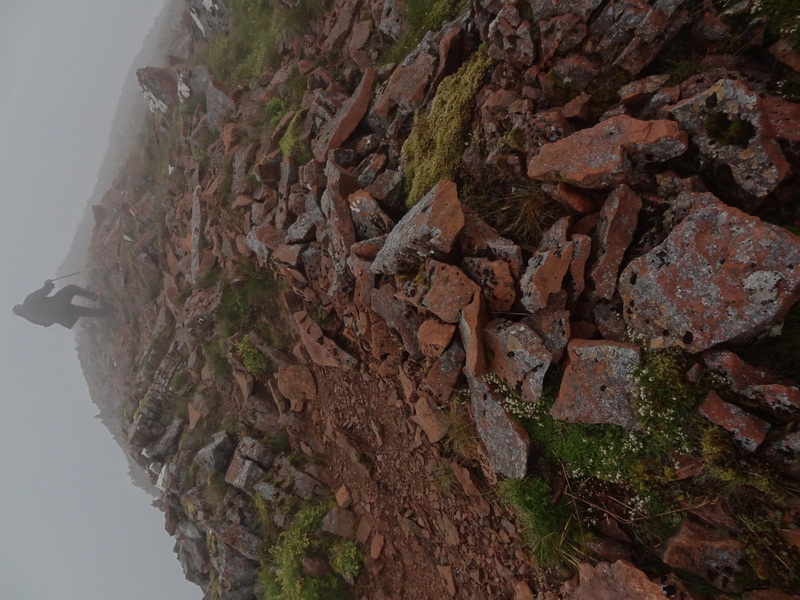 The summit ridge is a real gem, carpeted with Alpine Lady’s Mantle before giving way to bare rock and the first time I’d come this way. I realised it was twenty years ago I’d last been up on Sgurr Eilde Mor. It was the day after my graduation, driving up to Bridge of Orchy with a climbing club friend and taking the train to Corrour. A long moonlit walk through a winter night so bright it could have been day to the bothy above Loch Treig. The next day I walked up the  east ridge in a wind tunnel. A gale was screaming over the ridge from the north but was ripping right over it and whipping back against the face taking the clouds with it and it formed a calm tunnel up which I walked. I remember well almost ending up in the river on the way back, fishing out a huge lump of deadwood for the bothy fire. I was glad of it though as it was one of the coldest nights I’d spent in a bothy.

Back at the gear we grabbed another bite to eat and headed back to Kinlochleven where we had another coffee at the Ice Factor, playing at Grumpy Old Men while I tried to explain the delights of ice climbing to a disbelieving Penguin. The Guns ’n Roses didn’t help much either. He doesn’t care much for that sort of music does Penguin. What a pair of old pals!

You can see all the pics here.